As always at this time of year there are many new faces in Cranston schools. That’s the process and to be expected. Yet classroom veterans will likewise be seeing and meeting new administrative …

A LIFETIME OF LEARNING: Eden Park students enter their school for a new year full of learning. Aug. 29 was the first day for Cranston’s Pre-K, kindergarten, grades one, six and nine students. On Aug. 30, students in grades two through five, seven through eight and 10 through 12 started their fall 2022 courses. (Courtesy of Cranston Public Schools)
Posted Tuesday, August 30, 2022 7:00 pm
By EMMA BARTLETT

As always at this time of year there are many new faces in Cranston schools. That’s the process and to be expected. Yet classroom veterans will likewise be seeing and meeting new administrative faces. We make the introductions.

As the new school year begins, Cranston Public Schools welcomes 13 educators to new principal/director roles within the district. From seasoned educators switching schools to new educators entering the district, the Cranston Herald will highlight these individuals in the following weeks. 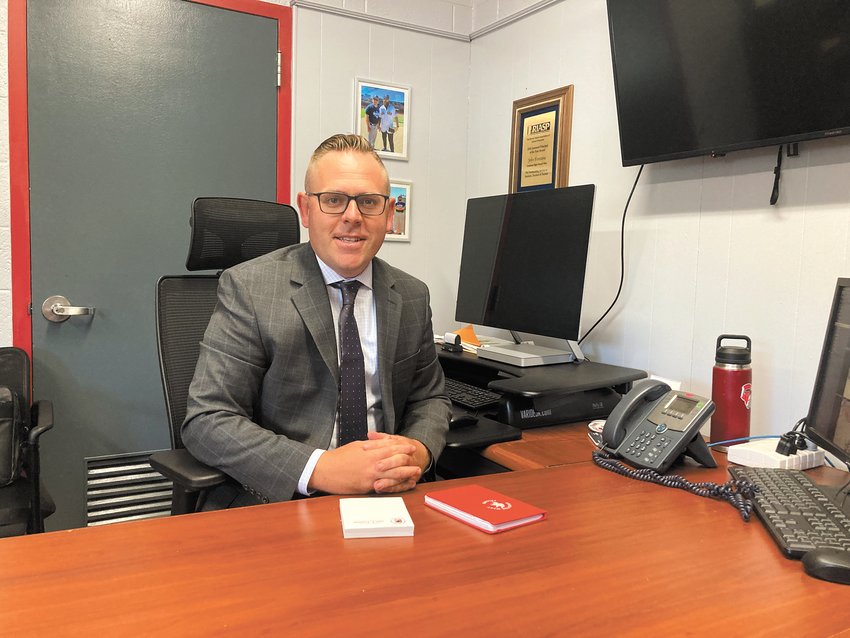 After seeing what a school could do for a kid, John Fontaine knew he wanted to go into the education field. He has spent the last seven years as the Cranston High School West assistant principal and will now take on the role of principal at the school.

Fontaine, who is a 2004 Cranston West graduate, cited his teachers and Principal Edmond Lemoi for being an inspiration for him. He attended Rhode Island College, which he graduated from in 2008 with a bachelor’s in education and a focus on secondary mathematics. His first job was teaching ninth through twelfth grade math at Cranston East.

“East has a special place in my heart,” said Fontaine.

After five years at East, Fontaine returned to West as the assistant principal in 2013; he graduated from Providence College with a master’s in educational leadership that same year.

In his new position, Fontaine is looking forward to helping kids, their families and staff members everyday. He said he learned a lot from Principal Lemoi and added that Principal Thomas Barbieri was an incredible mentor.

Fontaine said right now the goal is to keep the ship sailing at West. From his time there and working with Barbieri, he knows what does/doesn’t work. The ultimate goal for the school community is to take West from a four-star school (as determined by RIDE) and bring it to a five-star school.

Fontaine, who met his wife at West in eleventh grade, still lives in Cranston. He is also the recipient of the 2018 assistant principal of the year award from the RI Association of School Principals. This will be his 15th year in CPS’s district. 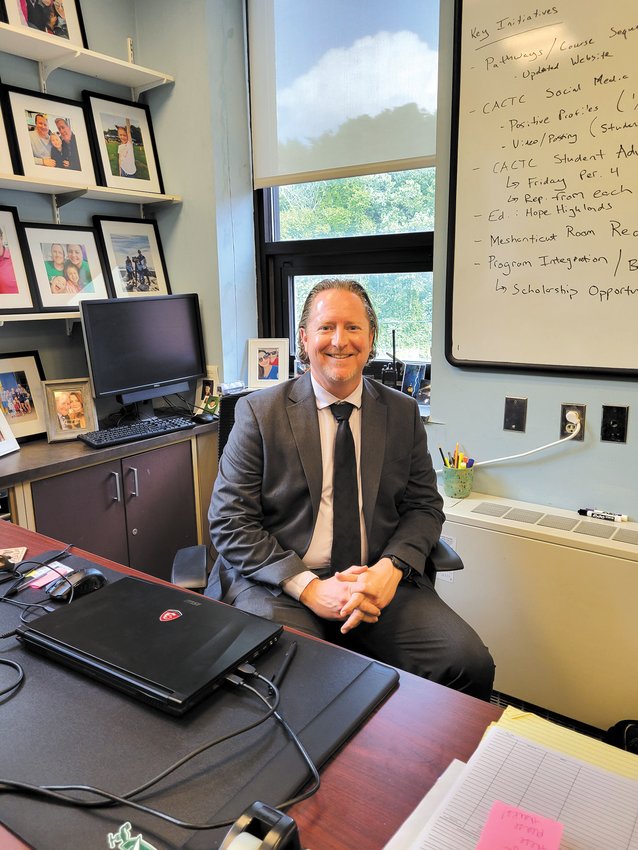 Working at Cranston High School West is like coming home for Kenneth Hopkins Jr. Hopkins will serve as the district’s director for the Cranston Area Career and Technical Center (CACTC). Coming from a family of teachers and growing up in Cranston, Hopkins always had a strong passion for educating kids. He attended Garden City Elementary School, Western Hills Middle School and graduated from Cranston West in 1999.

Hopkins went on to Providence College where he graduated with a bachelor’s degree in theology and with a minor in political science in 2003 and later received his master’s  in school administration in 2011.

In his new position, Hopkins looks forward to continuing the district’s outstanding programs and working in partnership to develop more opportunities and experiences for Cranston students.

Hopkins added that it’s wonderful being back.

“I passed my senior locker the other day, and it added a little smile to my face,” said Hopkins.

While this is his first time teaching in Cranston, he spent seven years coaching the boys’ JV basketball team at West.

He said the fact that Cranston has a lot of former students come back to help out at the schools in some way or to teach is phenomenal and it’s a credit to the district’s institutions. 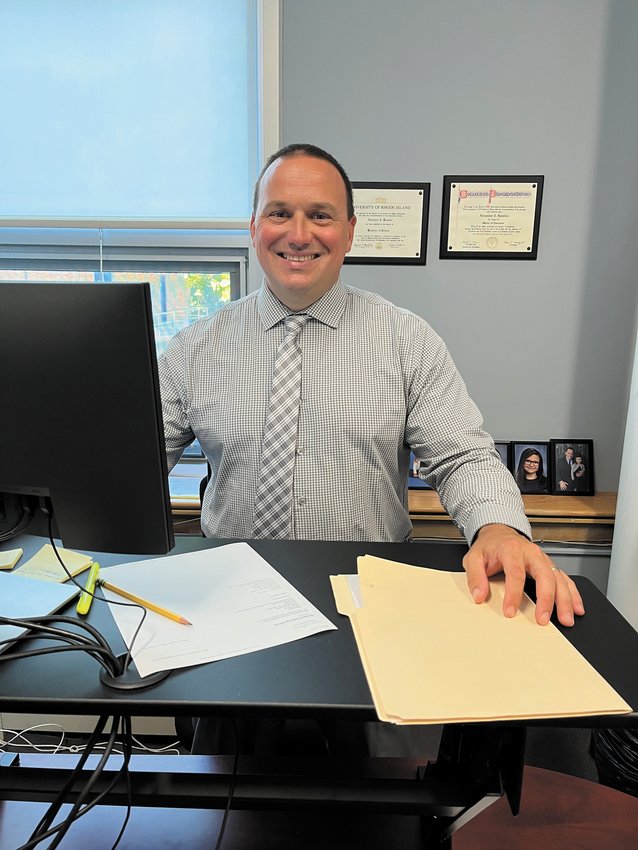 Park View Middle School’s new principal, Alex Kanelos, cites some of his educators and coaches as reasons for why he decided to go into the education field. These individuals had a positive impact on his life and, when he started thinking about his career, he decided to become a teacher.

Kanelos began his teaching career at East Providence High School as a health and physical education teacher. He was there for eight years and spent time coaching football, baseball and serving as the dean of students. Eventually transitioning to Cranston Public Schools, Kanelos began his administrative career at Cranston West as an assistant principal. After working three years there, he said he was humbled to be appointed the principal of Hope Highlands Middle School.

Kanelos got involved with the administrative side of education because he thought he could have a bigger impact on the school communities.

“I think this year is an opportunity to hopefully get back to some of those things we weren’t able to do in the past two years,” said Kanelos.

He’s looking forward to building relationships with the students, teachers and families and said school culture is a huge component to any successful school. Kanelos wants to bring back extracurricular activities prior to the pandemic and get kids involved – whether it is athletics, the arts or other activities related to the school’s content areas.

Attendance and having students on time every day are top priority for Kanelos. He said some kids have gotten out of the habit of going to school, due to distanced learning and quarantining and it’s time to get them back in and engaged.

Kanelos obtained a Bachelor of Science degree from the University of Rhode Island where he was a member of the baseball team. He also holds a master’s in educational leadership from Providence College. 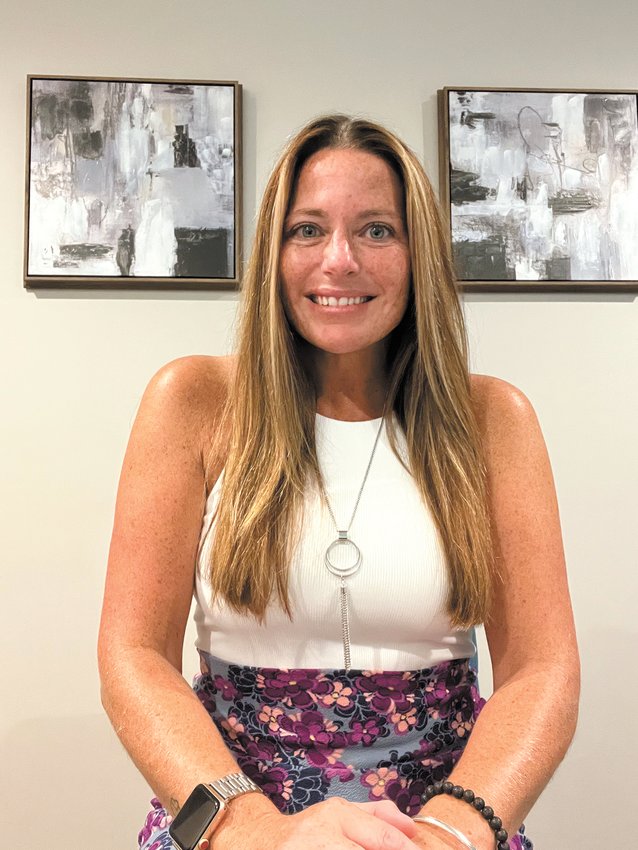 After two years as the assistant principal of Gladstone Elementary School, Amy Vachon will now serve as the school’s principal.

Vachon’s desire to be a teacher came at a young age.

“I had always wanted to be a teacher, since the age of four. I had a playroom as a child that had a desk and chalkboard. I made all my friends play school with me including my younger brother. It was my favorite pretend time activity,” said Vachon.

Prior to working in Cranston Public Schools, Vachon spent 15 years at Windham Public Schools in Connecticut. She spent five years teaching fifth and sixth grade, five years teaching fourth grade, one year as the K through fifth grade technology teacher and four years in an instructional coaching position. In her new role, Vachon is excited to work alongside the teachers, support staff and families at Gladstone to promote academic success and to strengthen our community partnerships.

Her goal this year is to improve student attendance and reading engagement. Gladstone will have special school events for students – such as Mrs. Vachon’s monthly Town Hall meetings along with family events such as Trunk or Treat. Additionally, the school has created social emotional spaces in each classroom, which students have access to at any point of the day.

Vachon added that reading is a crucial part of learning, and she has embedded a 15-20 minute window of time into the master schedule for all students and staff to read; the objective is to promote engagement and encourage students to become lovers of reading.

Vachon graduated from the University of Massachusetts, Amherst in 2003 with a Bachelor of Arts in English with a minor in Psychology. She immediately went into a master’s program at the University of New Haven and completed a Master of Science in Education in 2005.

In 2018, she started her leadership program with the University of New England.

“After working closely with teachers over the past few years, I realized my biggest impacts came from working with everyone involved in the educational process,” Vachon said. “I felt I could make more of a difference moving into a leadership role. I completed my program and hold my certification in Advanced Educational Leadership in 2019.”

A jazzy tribute to Banjo Bob

Could this be for real?

RI DEM: ‘Bobcat sightings are a rare and exciting event’