See it at the movies

If you were an Elvis fan, or spent your youth listening to his music, you have got to see this movie.

We’ve seen too many Elvis impersonators …

See it at the movies

If you were an Elvis fan, or spent your youth listening to his music, you have got to see this movie.

We’ve seen too many Elvis impersonators over the years and are happy to report that Austin Butler isn’t one of them.

From his younger days as an insecure performer – through his incredible successes and to the tragic ending – Butler makes you feel for this talented, troubled super star.

See it on the big screen with all its pomp and glory. Enjoy the extravaganzas and the contrasting intimate moments.

Grab yourself some popcorn and a soda because you’ll be sitting in those comfortable chairs for three hours, including the previews.

Most of all, enjoy the music, which includes most of the King’s biggest hits. (I wish they had included more gospel and my favorite: “Peace in the Valley.”)

You will not like Colonel Tom Parker and the way he manipulates and takes advantage of Elvis through his entire life. Tom Hanks gained some weight and added a ton of makeup to play the role. At times I had trouble understanding his garbled accent, but there was no mistake about his sordid character.

The story parallels the troubled times in our country during Elvis’ climb to fame. Three assassinations, the Vietnam War and racial tensions all play a major role in Elvis’ life and career.

One of the major attractions is the careful attention given to the music. Whether it is a recording studio or a ballpark concert, the large screen and sound system make you feel part of the action.

Elvis was larger than life, and the attention to detail shows that. In spite of the length, I could have taken more of Elvis…and less of Parker.

Joyce hardly ever laughs out loud at the movies. But those crazy little yellow creatures got to her.

After a while, they got on my nerves. But they are still one of the best animated characters ever created.

The second sequel in this successful series takes us back to Gru as a child, and his quest to become the meanest villain in the world.

Gru gets an interview with the Vicious Six but is rejected.

He’ll show them! With some help from the Minions, he steals the coveted Zodiac Stone, giving it to Otto for safe keeping.

Otto loses the stone and the Vicious Six – plus old villain Wild Knuckles – go on a wild and crazy chase, which the kids will love.

Kevin, Bob and Stuart are the three major Minion characters. They have their big moment piloting a plane in a segment you have probably seen a dozen times in the trailers and on TV.

The movie is non-stop for an hour and a half, with some additional funny scenes during the credits.

The adults will relate to familiar 70s songs by Linda Ronstadt and Karen Carpenter and references to seventies stars.

Steve Carrell voices Gru, while one of the sweetest actresses in the world, Julie Andrews, voices Gru’s crotchety mother.

It is silly, but it is a great family movie with nothing offensive to worry about with the young ones. 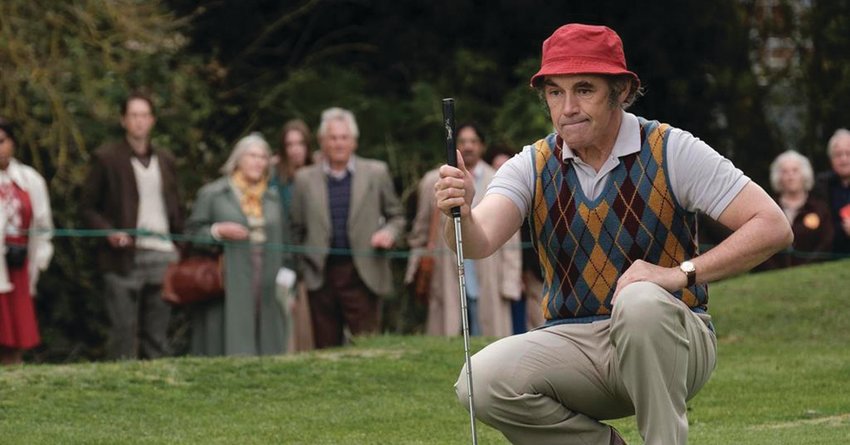 Mark Rylance gives a touching performance as the working class  family man, Maurice Flitcroft, who dreams of a better life.

Watching the telly one day, he is fascinated by the game of golf and decides to make it his next profession.

He sneaks on private golf courses, practices in his living room, the beach and anywhere he can hit a ball. He applies to play in the British Open in 1976 and, through a fluke, is accepted.

Flitcroft becomes both a laughing stock and a hero as he scores double figures on every hole and is banned from the game.

He finds a way to enter a future open and takes the golfing world by storm, becoming the working man’s hero.

The movie starts slow before picking up enough steam for its satisfying ending.

The fact that this is a true story (with a little embellishment) makes it all the more fascinating. Add Rylance’s portrayal of Flitcroft and you end up with a lovely little movie.

The more skills the merrier? NOT so

Humans of Cranston is a recurring column showcasing the stories of Cranston residents’ community involvement, diversity, and unique life perspectives. Berta Santes is a Guatemalan mother of …

The Bird Man who never got caged

One person can make a difference

Johnston Police: Have you seen these shoppers?

The Winter Market at Warwick …